For Writers, No Doesn’t Always Mean No: Drown Your Rejection Sorrows in These Rejections by Famous Writers 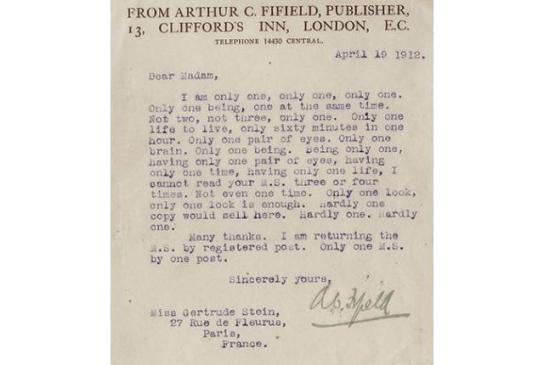 It seems Alfred Knopf didn’t always understand satire. Animal Farm, the famed dystopian allegory that later became an AP Reader standard and Retrospective Hugo Award winner, was turned down because it was “impossible to sell animal stories in the U.S.A.” A British publishing firm initially accepted and later rejected the work as well, arguing that “…the choice of pigs as the ruling caste will no doubt give offense to many people, and particularly to anyone who is a bit touchy, as undoubtedly the Russians are.”

Most fans know that King’s big break came with Carrie, the story of a friendless, abused girl with secret telekinetic powers. Though one publishing house told him they were “not interested in science fiction which deals with negative utopias.  They do not sell,” Doubleday picked up the paperback rights to the novel and sold more than a million copies in its first year.

Though Lord of the Flies was one of my favorite books from high school, it seems some publishers disagreed. One unimpressed agent called the classic “an absurd and uninteresting fantasy which was rubbish and dull.” To date, the book has been required reading in high schools for nearly fifty years, 14.5 million copies have been sold, and Golding’s work has been adapted for film twice.

It’s not incredibly surprising that Kerouac’s work was considered unpublishable in his time. After all, the guy wrote about drugs, sex, and the kind of general lawlessness that many people in the 1950s considered obscene. When shopping out his ubiquitous On the Road, Kerouac’s agent’s mail contained gems like, “His frenetic and scrambling prose perfectly express the feverish travels of the Beat Generation. But is that enough? I don’t think so” and even worse, “I don’t dig this one at all.”

Back in 1966, the young romance author was trying to sell a story she called “Journey Back to Love.” It didn’t go well, however; her submission to Redbook came back with a rejection from the editors, stating “We found the heroine as boring as her husband had.” Ouch! The piece was eventually run as a two-part serial in an English magazine, and Mary Higgins Clark currently boasts forty-two bestselling novels.

When Rand sent her manuscript out for The Fountainhead, a request from Bobbs-Merrill for her next work-in-progress came back with a curt “Unsaleable and unpublishable.” Not to be deterred, the author called upon Hiram Haydn, newly appointed editor-in-chief of Random House. After an “infinite number” of questions and an assurance that Ms. Rand would not be censored, she signed on with Random House and, to date, has sold over 7 million copies in the U.S.

In a bid to remove himself from a contract with publishers Boni & Liveright, Hemingway penned The Torrents of Spring with the sole intention of being rejected. Horace Liveright turned it down, Hemingway’s contract was broken, and he moved on to find a new publisher. Of course, it didn’t go smoothly; one queried editor told the author that “It would be extremely rotten taste, to say nothing of being horribly cruel, should we want to publish this.” It all ended well, however. Papa Hemingway moved on to Scribner, who published all of his books from then on—each of which became a bestseller.

This entry was posted on February 19, 2014 by gregorymilleris in Books, Business and tagged Agents, Books, Business, Editors, Inspiration, Publishers.