Why I Love Index Cards as a Writing Tool (Pt. 2): Full-Color Edition

For the last 2-3 weeks, my work on the current screenplay has consisted of staring at a wall of index cards (in photo at left). Occasionally I add a detail to one card. Sometimes I’ll take down a card all together or add a new one. On a big day, I’ll rearrange some cards.

This is how I’m outlining my script: linear sequences (acts) in HORIZONTAL ROWS, left to right, one story beat per card. Btw, I know that during the outlining process a lot of writers – like me – get really impatient to start drafting. Guess what? I’m already writing prose too, going back and forth between a rough draft and the outline.

I was simultaneously working on a second index card outline with a client (that’s in the other room!) and he brought over some colored stickers. I was a little dismissive, like “well, let’s not get carried away…”, but soon after he left, I started using the stickers for my own cards. Green for action, pink for love, orange for antagonists. Next thing I knew, I was running out to the office supply store to get colored sharpies too. 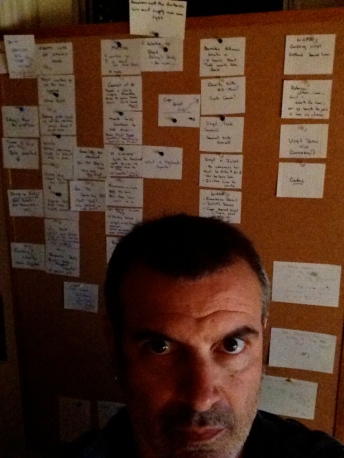 Suddenly I could see at a glance that I had too much action in the first half of the script and barely any in the second half. It  showed me that the love sub-plot started way too late in the movie and I had to do something to start that storyline earlier. I also saw that I had too many characters and condensed several of them. And the cards revealed that my five acts really wanted to collapse into four acts!

Now I’m using the cards like accupuncture points, opening meridians between Act I events and Act III payoffs by adding a development beat in Act II, seeing quickly that payoffs don’t have set-ups or vice versa.

Meanwhile, next door, my friend Alex (in photo at right), a writer who writes a lot and teaches writing, is working on an original TV pilot and using an index card outline in VERTICAL COLUMNS, one for each act! He says he likes horizontal flow for movies but vertical flow for a tighter structure like TV.

I haven’t seen anyone put the cards in a circle yet, but I’m open to the possibilities.

7 comments on “Why I Love Index Cards as a Writing Tool (Pt. 2): Full-Color Edition”