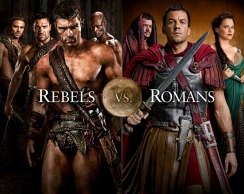 I love “Spartacus” so much I don’t know where to startacus!

ADVISORY: If you object to dirty words or thoughts, or have qualms about cartoonish ultra-violence, this isn’t for you.

The ‘ragtag band of rebels’ is one of my favorites stories in general, so I’m pre-disposed to like a series about a slave revolt. Not just slaves, gladiators!

When it comes to violence, I’m partial to old-fashioned gutting and chopping. When I’m in the mood for blood, I like it medieval and “Spartacus” so delivers. The action is produced in an over-the-top comic book style, with copious slow-motion and animated blood and guts. There’s at least one really satisfying gutting or throat slashing in every episode – all accompanied by epic warrior roars and geysers of blood.

But it’s the focused agenda that really keeps me coming back. This show knows itself so well!

Week after week, “Spartacus” is tight and pure: they fight, they fuck, they re-frame the story, then more fighting, usually more fucking, and a little more re-framing, usually topped off, at the end of each episode, with a more fighting – the promise of much more of the above to come.

The sexuality here is even more brutal (and more frequent) than “Game of Thrones”, and definitely can get a little rapey, but seems, dare I say, kind of realistic given the premise. “Spartacus” is gleefully committed to filthy fornicating involving girls, boys and all combinations thereof. Their glee in perverse sexuality is exceeded only by their glee in perverse violence.

One particularly satisfying aspect of the series is that sexuality in this rebel army occaisionally even transcends traditional gender roles. The gay gladiator sub-plot is one of my favorites, and the core group of rebel gladiators includes at least two women who totally kick ass alongside the boys.

All this topped off by the language and dialog style, which seems like some crazy writer’s idea of Latin that drops most articles and ends up with lines like: “Come, feel mouth on cock,”. Oh, it gets rowdy.

Sure, the characters have poignant tragic backstories, but the show doesn’t let them distract from the present-tense fighting and fucking. If you’re in the mood for nuanced character, you’re in the wrong place.

This entry was posted on March 22, 2013 by gregorymilleris in Review, TV and tagged Reviews, TV.