6 Formulas for Formula Fiction (by Jim Denney via Michael Moorcock) 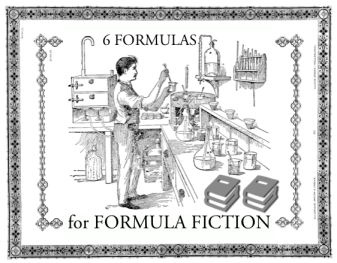 1. Length formula: 60,000 words, divided into four sections of 15,000 words, six chapters in each section, no chapter longer than 2,500 words. Each chapter is required to contain elements that advance the action.

2. Plot formula: the familiar tale of a lot of people competing in a quest to gain a much-sought-after object (familiar examples of such objects: the Holy Grail, the Maltese Falcon, the gold of El Dorado, Alfred Hitchcock’s notion of “the MacGuffin,” or the Rambaldi artifacts in TV’s Alias).

3. Character formula: a fallible and reluctant hero who tries to avoid responsibility, but ends up being pitted against vastly superior, even superhuman, forces.

4. Structural formula: a dire event occurs every four pages to advance the action and keep the reader hooked.

5. Fantastic images formula: the story must contain a series of wild, vivid, fantasy images, such as Moorcock’s “City of Screaming Statues.”

6. Time formula: the hero is in a race against time. Moorcock explained: “It’s a classic formula: ‘We’ve only got six days to save the world!’ Immediately you’ve set the reader up with a structure: there are only six days, then five, then four, and finally … there’s only 26 seconds to save the world! Will they make it in time?”

This entry was posted on November 16, 2014 by gregorymilleris in Books, Productivity, Science and tagged Books, Genre, Productivity, Vintage Graphics.