The Story Structure Countdown: How Different ‘Experts’ Say You Should Structure a Story 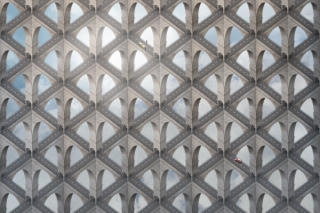 Lots of people have come up with lots of ways to map, chart, categorize, name and formulate story patterns and structures. (also see my Comparative Narrative Story Structure Chart for a graphic side-by-side exploration) – and if you like this, it’s just the tip of the iceberg of writer’s resources in Miller’s Compendium of Timeless Tools for the Modern Writer (reference e-book available now on Amazon).

Some of these structures are obviously and/or explicitly derived from others and some feature similar story beats with different names, but I find they all have something to offer – at least conceptually.

I’ve never personally been able to directly apply any one of these to any of my own writing projects or to any clients’ work. I’ve found that all but the most formulaic writing projects have their own unique structure which has to be discovered during the creative process.

[Contact Greg about helping you structure your own writing project. Call 323-717-4731 or e-mail Greg to discuss your particulars.]

There’s no magic formula that works for every project every time. You can always find examples of successful projects that don’t fit a given formula or find ways successful projects do fit a particular structure if you want to. Also, most of the people who name and formulated these concepts are not primarily writers per se and in most cases their structures are based on post-facto analysis of successful work rather than being used to generate the original work itself. But, even (or especially) if you’re trying to satirize a form or break a mold, you should know what the mold is.

Naturally, any serious discussion of moldy story structure has to start with…

22 Building Blocks from “The Anatomy of Story” by John Truby

Truby and his publisher insist you buy his book or take his class to get his secret formula, but it’s pretty similar to Campbell’s structure.

1–First line, or as near thereto as possible, introduce the hero and swat him with a fistful of trouble. Hint at a mystery, a menace or a problem to be solved–something the hero has to cope with. Include

– A DIFFERENT MURDER METHOD FOR VILLAIN TO USE

– A DIFFERENT THING FOR VILLAIN TO BE SEEKING

– A MENACE WHICH IS TO HANG LIKE A CLOUD OVER HERO

2–The hero pitches in to cope with his fistful of trouble. (He tries to fathom the mystery, defeat the menace, or solve the problem.)

3–Introduce ALL the other characters as soon as possible. Bring them on in action.

4–Hero’s endeavors land him in an actual physical conflict near the end of the first 1500 words.

5–Near the end of first 1500 words, there is a complete surprise twist in the plot development.

6–Shovel more grief onto the hero.

7–Hero, being heroic, struggles, and his struggles lead up to:

10–Shovel the grief onto the hero.

11–Hero makes some headway, and corners the villain or somebody in:

13–A surprising plot twist, in which the hero preferably gets it in the neck bad.

14–Shovel the difficulties more thickly upon the hero.

15–Get the hero almost buried in his troubles. (Figuratively, the villain has him prisoner and has him framed for a murder rap; the girl is presumably dead, everything is lost, and the DIFFERENT murder method is about to dispose of the suffering protagonist.)

16–The hero extricates himself using HIS OWN SKILL, training or brawn.

17–The mysteries remaining–one big one held over to this point will help grip interest–are cleared up in course of final conflict as hero takes the situation in hand.

18–Final twist, a big surprise, (This can be the villain turning out to be the unexpected person, having the “Treasure” be a dud, etc.)

19–The snapper, the punch line to end it.

1. The Call to Adventure

2. Refusal of the Call

3. Acceptance of the Call

5. Crossing of the First Threshold

6. Entering the Belly of the Whale

8. The Meeting with the Goddess

10. Atonement with the Father

13. Refusal of the Return

16. Crossing of the Return Threshold

17. Master of the Two Worlds 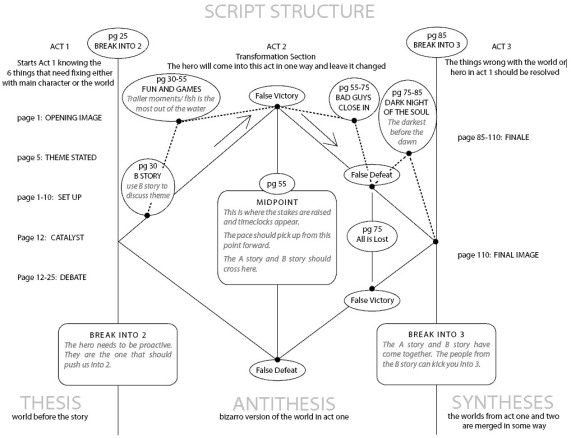 13 Beats of the Virgin’s Promise (from Kim Hudson)

Kim Hudson says: The Virgin begins by conforming to the wishes of others and eventually learns to hear her inner voice and bring it to life. It is the journey to creative, spiritual and sexual awakening. Movies such as Bend It Like Beckham, Ever After, The Other Boleyn Girl, Brokeback Mountain, Billy Elliot, Tootsie, Better than Chocolate, Virgin Suicides and Wedding Crashers, to name just a few, all follow this archetypal journey. And when you think about it, none of these protagonists are selflessly saving the community because none of them are Heroes. They are self-fulfilling Virgins.

Next time you create a Virgin protagonist:

12 Stages of the Modified Hero’s Journey (from “The Writer’s Journey: Mythic Structure for Writers” by Christopher Vogler)

11 Elements of the Inner Movie Method (from Viki King)

The 10 Acts of the StoryAlity Syntagm (in a 90 page script) from J. T. Velikovsky

8 Stages of the Harmon Story Embryo (from Dan Harmon) 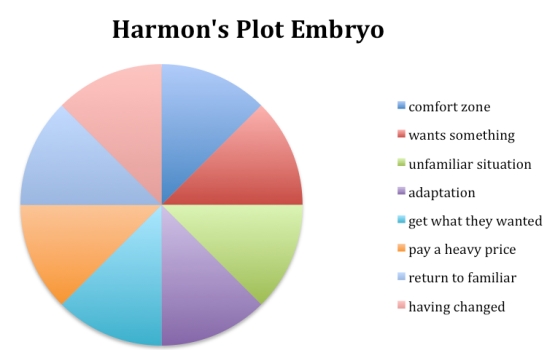 7 Beats of The Story Pyramid (from Gustav Freytag)

7 Essential Plot Points of the Screenplay Paradigm (from Syd Field)

a. Anticipation Stage (The Call to adventure)

e. Miraculous Escape (Death of the Monster) – The hero/ine is eventually victorious, and may also be united or reunited with their ‘other half’ (a romantic partner).

a. Initial Wretchedness at Home (The Call)

b. Out into the World (Initial Success)

a. The Call (Oppressed in the City of Destruction)

b. The Journey (Ordeals of the Hero/Heroine & Companions) May include some or all of the following:

f. Journey to the Underworld

i. The Goal (Kingdom, Other Half or Elixir won)

4. Voyage & Return Examples: Alice in Wonderland, Goldilocks and the Three Bears, Orpheus, The Time Machine, Peter Rabbit, Brideshead Revisited, The Rime of the Ancient Mariner, Gone with the Wind, The Third Man (1948)

a. Anticipation Stage (‘Fall’ into the Other World)

5. Comedy Comedy is dealt with by a less rigid structure. In essence, the comedy meta-plot is about building an absurdly complex set of problems which then miraculously resolve at the climax.

a. Anticipation Stage (Greed or Selfishness)

a. Under the Shadow – A young hero or heroine falls under the shadow of a dark power

b. The Threat Recedes – Everything seems to go well for a while – the threat appears to have receded.

c. The Threat Returns – Eventually the threat approaches again in full force, until the hero or heroine is seen imprisoned in a state of living death.

e. The state of living death continues for a long time when it seems the dark power has completely triumphed.

f. Miraculous Redemption – If the imprisoned person is a heroine, redeemed by the hero; if a hero, by a young woman or child.

6 Steps to Creating Story Structure (from “The TV Writers Workbook” by Ellen Sandler, Based on an Original Concept by Mark Ganzel)

5 Beats to the “Central Plot” (from Robert McKee)

Universal Five-Act Structure from “Into the Woods” by John Yorke

The article also compares Dramatica to 6 other story structures.

Simplified 3-Act Structure from “Into the Woods by John Yorke

The Three Parts to Any Story (from George M. Cohan?)

In Act I you chase your hero up a tree

In Act II you throw rocks at him

In Act III you let him down (or, in a tragedy, you kill them—or they fall to their deaths—but Cohan didn’t say that part).

3 Elements of Unified Plot Structure (from “Poetics” by Aristotle)

I know this list is highly-biased towards American and European models, but that’s what I’m most familiar with – and we’ve done the most explicit formulating.

Also, I’ve probably missed many examples of story structure. If you know of any, send me details and/or links and I’ll include them in a future post – or maybe a book.

If I can help you with your writing in any way, let me know. I’m available for one-time or ongoing coaching. Call 323-717-4731 for a free consult or e-mail me your particulars.

53 comments on “The Story Structure Countdown: How Different ‘Experts’ Say You Should Structure a Story”